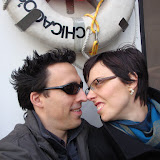 Day1: I knew that we were going on a trip, but I thought I could leave work at 1:30pm, so I wasn't going to to book vacation. When packing on Thursday night, I realized that I'd have to leave Entrust at 10:30am, making any real work impossible. Thanks to Chris, I had exactly the two vacation days that I'd need. So on Friday at 10am, I booked Friday and Monday as vacation, and rushed to the airport. We arrived with plenty of time but discovered that all planes had been delayed due to morning fog that prevented earlier landings. After a long wait, they gave us a 4:30 flight. With the extra time, we went to lunch at Thai Lanna across from the south keys centre. Before heading back to the airport, we picked up a travel guide from Chapters. Much later we discovered that we had accidentally shuffled the guidebooks and accidentally purchased the least useful from the selection. Back at the airport, we boarded a small propeller plane. It was Porter airlines and I highly recommend them. There is no first-class, there are no TVs, there is lots of leg room, your drink comes in a glass (read that not wastefully disposable) cup and the whole experience was vastly superior to that provided by other airlines.

We landed on the Toronto Island but missed the next connection by a few minutes. We ended up waiting until 7:30pm in a nice lounge with free internet at apple terminals. When we finally arrived at Chicago in the Midway airport, we took the train downtown. They have a great system there, easy to navigate, similar to San Francisco. We eventually arrived at Club Quarters, which is an excellent business oriented hotel. At 9:45pm (which was very late our-time), we had dinner at the adjacent Elephant & Castle. The server was excellent. I had the Union Jack Burger with French onion soup and two very well deserved Guinness. We had a great evening and overheard some interesting conversation from nearby lawyers. Finally, a little drunk and totally exhausted, we retired to our room, had a shower, watched some Malcolm In The Middle and went to sleep.

Day2: We woke up slowly to a sunny morning. The hotel room was all windows on two sides and gave a great view of downtown. We were in the area called The Loop. Out of the hotel by 10am, we walked to Starbucks then had breakfast at the Corner Bakery. We walked around and through Grant Park and met a darling old Dutch lady who despite being almost entirely blind was sight-seeing. Next we boarded an architecture boat cruise, which was also a surprise, and I enjoyed it very much. The boat travels the downtown rivers and gives you a great view of the city and its history. Be warned though, it's cold and windy.

After the cruise we went shopping at H&M where I became the proud owner of Incredible Hulk underwear, a green merino wool sweater, and an orange dress shirt. Then we had to run from the rain and caught a cab to Gino's East for deep dish pizza. It's hard to describe what is meant by deep dish pizza in Chicago. Think of thick delicious almost cornbread-like crust in a deep metal dish with pizza soup on top.

The rain had let up so we started to walk back to the hotel, but stopped on the way for Amanda to get a manicure. After this, it started to rain in earnest so we bought two $5 umbrellas from a drugstore. The EL gives you the idea that you're sheltered from the rain, but its a fallacy. Back at the hotel, much fussing and stress ensued while I sat in my suite complacently waiting for the storm to pass. Of course, the result was that Amanda looked fantastic and we were bundled into a cab for the surprise main event. As we arrived, I realized that it starts with a red carpet, which was a little unnerving. Welcome to the symphony opening night gala. We ascended a spiral stair with hundreds of people watching us. I checked Amanda's coat while she fetched some complimentary wine. We sipped and discussed everyone's outfits and I felt decidedly like someone in a film. Later, in the symphony hall, they introduced themselves as the best symphony in the world. The first set was very good. The rest was very long. Afterwards, we stopped at Potter's Lounge on the way home and had expensive food and drinks. Porter's wasn't a great place but we had a great night. We talked about landmark events in our last seven years. I think mine were:

Day3: We woke up to another bright morning and walked to the fountain in Grant Park, stopping at Starbucks on the way for breakfast. We took photos and walked to the aquarium but the entrance was expensive and we only had an hour. So we walked further to the Space Center and saw some great views of the city. There was a bears game on and thousands of people were streaming to the stadium. And there was a huge tail-gate party, like nothing I've ever seen. Eventually we took a cab back to the hotel, got our gear, and had (normal) pizza for lunch at Luke's. We took the EL around the loop and back to the airport. Porter is an excellent airline. We had a very short layover in Toronto and were home in plenty of time and well rested. I had a great trip.