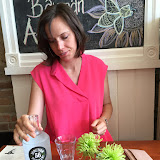 Gave Pilot a quick walk before heading out for Stratford. We dropped him off at a kennel near Fallowfield. Started listening to a great new audiobook on the drive. We stopped for lunch at a great Roti place before getting on the toll highway. We visited with Jana and Andy and Finley. Jana made dinner and we got to Stratford in time for an evening play: a mashup of Richard II and Henry IV part 1. It was great. But we were exhausted by bedtime.

We slept in and missed the archive tour. We had an early lunch at Montfort. Delicious. Lion and witch was good but for children. We had a nice afternoon by the water and a late dinner at Mercer Hall. Excellent. Afterwards we Had a long walk by the lake and cheesecake at home.

Slept in. Barely made it to the garden tour. It was cold and afterwards started to rain a bit. We took shelter in Tim Horton's. We did some shopping and tried for York St. sandwiches but lots of places were closed for Canada Day. We had thai food instead. Then went home for a long nap. We saw Redemption (Henry IV Part2 and Henry V) at Tom Patterson. It was excellent.

I woke up with a sore throat. We did some shopping, picked up sandwiches for lunch and saw Macbeth at the Festival Theatre in the afternoon. The show was great, but by this time I was full on sick. We spent the evening at the hotel and had take-out Raja for dinner.

I was too sick to drive, so Amanda drove the whole way home. We stopped at the Big Apple for lunch. At home we unpacked and went to bed early.