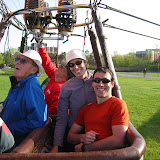 On May 12th 2009 we flew in a Balloon over Ottawa. It was a great experience. I booked with Sundance Balloons by calling 613-247-8277 and chatting with a friendly agent about what was involved, when they were available and how to reserve a spot. They have a pretty good website where you can do it all yourself. It's a two part process. First you pay for vouchers that give you the right to fly. Then you use the code from the vouchers to schedule a flight. This is because ballooning is very weather dependent and you might have to re-schedule several times.

I went with my wife and my dad and handled the booking. You need lots of info to fill out the forms, like date of birth and weight (which is reasonable considering that it's a balloon ride). They tell you to bring a hat -- advice which I ignored. I thought they were concerned about the sun. Nope. It's the giant fire three feet from your head. Believe me: bring a hat.

It's not cheap, $220 per person, but I had a great time. Our balloonist was Frank, and he and the crew were spectacular. We took off from Carleton University and followed roughly this route. The take off and landing are the most existing part. While you're up there you move with the wind, so it is very calm, and there are great views. To spice things up, Frank lowered the balloon once we were outside the city so that I could actually touch the tree tops. We'd been up for quite a while and sunset was approaching when Frank decided that he'd be able to set down in the middle of an Orleans soccer field. We came in as close as he could over a power line and landed with two bounces. A guy from the chase vehicle was already there when we touched down and grabbed on as we bounced to add weight and help us land. It was lots of fun.