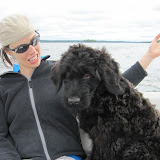 Pilot is a big dog and as such requires special consideration. There are three main rules to follow.

1. Don't feed him anything other than the kibble or treats we provide. He has a temperamental stomach and the results of even a little uncooperative food can be catastrophic.

2. Don't let him run and play within an hour after feeding. This can cause bloat which is a leading killer of big dogs. The easiest way to avoid this is to feed him before bed.

3. Don't encourage jumping. When Pilot is excited he may lift his paws off the floor. Immediately turn your back on him and wait for him to come around to your front. He should never be taken outside or given treats when he is acting excited.

Pilot expects a 20 minute walk in the morning. He normally poops, but in the winter, this isn't essential. I usually do this around 8am, just before leaving for work. I feed him and pen him in his corner as I leave. He gets three cups of food, two in potion bottle kongs and one in his dish. He sleeps most of the work day. He's gone as long as ten hours without complaint but we try not to leave him longer then eight hours.

First thing when you get home, let him out for a pee. He generally lays about, roams the house or asks to be petted in the evenings.

Pilot expects a 30 minute walk in the evening. If he had a good morning walk you can get away with 10 minutes. If he only gets one walk a day, his expectation to play with you or be petted while indoors will skyrocket and he may wake you at night.

If he doesn't poop once a day, you're in trouble.

Before bed, let him out for a pee then pen him in his corner and feed him. He gets four cups of food, two in potion bottle kongs and two in his dish.

If he cries, it usually means he needs to be let out to pee. In the winter he sometimes refuses to drink water and will only eat snow. In this case he may cry in the night when he gets thirsty after dinner. To combat this you can put him to bed and feed him several hours early, then let him out to eat snow just before bed.

In the summer Pilot must always have plenty of fresh water.

Feel free to lengthen his walks, especially on the weekends. The more he's walked the less he'll bug you for attention when indoors.

How to Leave and Arrive

Pilot's breed gets anxious when their owners leave. This is bad for him, for you and for your neighbours. Avoid this by not exciting Pilot when you leave or come home.

Before leaving, let him out to go pee. Bring him inside and pen him in his area. If you're not feeding him get him to sit-stay and set a toy stuffed with some treats about three feet from him. As you go out the door say "free" encouragingly. He should start working on the treat.

When you arrive, take your time setting down your stuff or taking off your gear while basically ignoring Pilot. Calmly greet him and let him out for a pee. Note: if you've been away a long time and he's crying when you get back it might be an urgent pee situation and you should fast-track the above.

Most command should be said in a low voice except for "come" which should be said in a high excited voice. If he hasn't been good with a particular command be sure to reinforce success with treats as close as possible to the time when he successfully executes the action. It can also help to remind him you have treats before you actually need the command. For example before arriving at an off-leash dog park you might ask him to come while he's at the end of his leash and the give him a treat. A few times of this before visiting the park will prime his recall when actually at the park.

Verbal commands work, but hand signals work much better. Of course him to see the hand signal he has to be looking so we normally use both at the same time. Most of these commands work at a distance, but the closer you are (to Pilot), the better they work.

"Sit" – Right hand moves from beside the hip to shoulder, palm facing shoulder.

"Down" – Right hand moves from beside the hip to shoulder, palm facing out.

"Go around" – Right hand goes from in front of belly to behind back. This command gets him into the heel position. It can effectively be used to distract him from something as he'll think "Oh, I'm supposed to start working now".

"Heel" – Hand is held at hip in a fist. Works best with a treat is inside the hand. This is also a good distraction as he focuses on your hand during the heel. So if you need to walk past something you don't want him to focus on you can make him heel first and he's likely to not even notice the distraction.

"Free" – Used to release from sit/stay/etc.

"Ok" – Used to release from sit/stay/etc prior to crossing a street.

"No no no" – Said gently when Pilot is doing something you don't like.

"Off" – Said firmly when Pilot has his face somewhere you don't want it to be.

"Shhhhh" or "Shush" – Said loudly when you want Pilot to stop barking, growling or making noise. You can also pet him slowly and lightly when saying this to calm him further. Shouting at him won't work. It will just further excite him since he doesn't understand what shouting means.

"Good" or "Good Boy" – Said slowly and calmly. Say this anytime Pilot does something you like.

"Look" – To get Pilot's attention.

"Come" or "Come On" or "Come Here" – Said excitedly. If Pilot doesn't immediately come, say "Look" and start backing away. Alternatively, crouch down and open your arms as if you want him to come and give you a hug and repeat the command even more excitedly.

"Give Paw" or "Shake Hands" – Pilot doesn't know these commands. He should never touch people with his paws. If he does, immediately turn your back on him. He should come around your front and sit or lay down, effectively begging forgiveness.

"Up" or "Jump" – Pilot doesn't know these commands. He should never jump up. Don't let people hold toys or stick our of his reach as incentive to jump.

"Roll Over" – Pilot doesn't know this commands. He should never roll over. It can cause bloat and kill him.

Making a buzzing or trumpet or motor boat sound with your lips will for whatever reason get Pilot very excited. This is a bad idea. Try to avoid it.

Bloat is a primary killer in large deep chested dogs. We've never seen a dog with bloat and symptoms vary by dog, but here's what to look for:

If Pilot shows any of these symptoms after playing, call the vet right away. Bloat can kill within an hour.

Most of those symptoms can happen unrelated to bloat. The correlation with bouncing around is the key. In the summer Pilot may not want his walk because of the heat outside. He sometimes decide to not eat for a day. He sometimes decides to eat some grass which causes him to vomit. (We discourage him from eating grass).

Our vet is Centretown Veterinary Hospital, 613-567-0500, 955 Somerset St West (near Preston). They're open every day but Sunday. They will tell you over the phone what to do if you think there's a problem. If they're closed, you can take him to either of the emergency clinics:

Unlike the human medical system, the vets easily share records. You should be able to give any of these vets the name "Pilot Holtstrom" and they should have access to his records.

If you have to make a decision without contacting us, assume we're willing to pay any price.

Sometimes we need to go away for more than 10 hours or Pilot has just made us crazy. When that happens, we take him to PetSmart, 613-225-6627, 1851 Merivale Rd (near Hunt Club) for Day Camp. He loves it there. They'll keep him between 7am and 9pm. Sometimes they're full so you may need to call ahead.

They can also keep him overnight. In that case bring his day's worth of food and make sure they only feed him at night to avoid bloat. We're happy to pay for any PetSmart visits you feel you need.