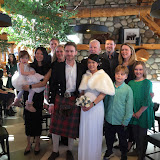 Barrow and I flew out to Calgary and drove to Banff for Alex & Kathy's wedding. Great but short trip. Very cold. Beautiful. It was great to meet Kathy's family and to see Alex's again after such a long time. 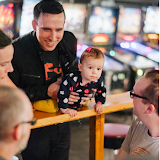 Jason and Kim had a totally wicked wedding reception at The House of Targ. We brought Libby. It was her first dance. 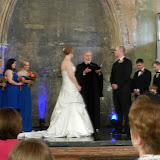 Maureen and Alistair were married in a heritage church that had been converted into a general reception area. It was a great venu, and Mo's sister gave a fantastic speach. 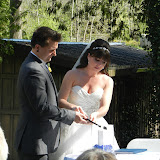 Spencer & Caitlin were married in Goderich at the Benmiller Inn where Spencer is head chef. They had beautiful weather and Barrow and I served as Spencer's groomsmen. I met with lots of old friends and danced the night away. 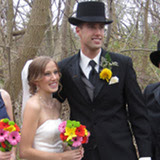 Kristen & Joe were married in Sarnina. The week of their wedding the roof blew off the Holiday Inn where everyone was planning to stay. Luckily we were all able to stay at the next door Best Western, and the reception part of the Holiday Inn was undamaged.

They had an informal catholic ceremony that was easy to enjoy, and everyone gave really fantastic speeches during the reception. 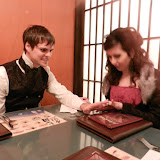 Shannon & Jared were married under the spider at the National Gallery. Afterwards we had sushi dinner and went to the Rocky Horror Picture Show. 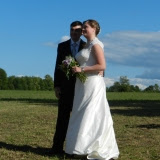 Jana & Andy were married on her parents Horse Farm in Shanty Bay. They had a lovely outdoor ceremony and reception. 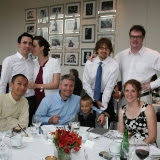 Paul & Aylia were married at the TIFF building in Toronto. I felt like I was inside a movie gala. During Paul's speech lightening arced accross the city behind him. This was also a great reunion of old friends. 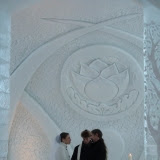 Tyner & Cynthia were married at the Ice Palace outside Quebec City. We all stayed at the same hotel and the night before the wedding was a huge party, like a school reunion. Their ceremony was fantastic and we danced the night away at their reception. 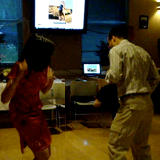 Lenko & Renita were married by a civil officiant at a community center in Toronto. Their wedding was a fantastic mix of Bulgarian and Indonesian culture. Their first dance started out as you'd expect, then they broke out into wild dancing to Metalica. It was loads of fun. 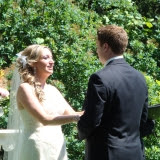 Mike & Caroline had a fancy wedding on a beautiful day in July near Cambridge. It was great to see them back in Canada and was a great chance to catch up with old friends. 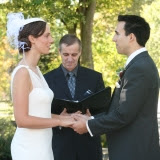 We got engaged while Amanda was still living in Kingston. So even though we were living in Ottawa at the time of the wedding, we knew Kingston much better and planed the wedding there.

We were to be married Sunday morning. During the drive to Kingston on Saturday morning, the car ahead of us rolled over on the highway. There was no major trauma, but we stuck around while the police and ambulance arrived.

Finally in Kingston we went to the east edge of court park where there is a water fountain and a brass statue of kids playing leapfrog. We thought this would be a good location for the ceremony. We wanted to decide positions and had to ask a man in a powered wheelchair to move, and had some kids bike through us while practicing where to stand. Despite these confidance erroding experiences, everything worked like a charm on the day of the wedding.

I like the officiant from Dan & Nathan's wedding so much, I thought she might do ours. She was from allseasonsweddings.com which is an excellent resource for all sorts of officiants, but didn't want to travel to Kingston unless we really needed her.

We contacted Paul Bowman who was fantastic. He met us at a cafe to let us see if we liked him, joined the wedding party for dinner at Grecco's the night before the ceremony, wrote us a custom ceremony based on what we told him about ourselves and after having met our family at dinner. I highly recommend him.

Our wedding was very small. We all stayed at B&Bs just next to the ceremony, had breakfast together, had photos taken in the B&Bs gardens prior to the ceremony, and had a small reception lunch at the university club after the reception.

Then we all changed into street clothes in the washroom of the university club and everyone headed home except Amanda and I who flew to Toronto for a three week trip to London, Dublin, Edinburugh, Munich. 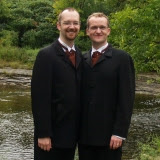 Dan & Nathan were married in Merrickfille at Sam Jakes Inn. I printed the google map from the first search result, and it directed us to a one-lane dirt track and said we had arrived. In considerable panic we took increasingly urban roads until we came accross a town, which was luckily Merrickville wherein Sam Jakes Inn was prominant. We arrived just in time. 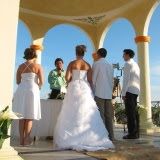 Chris & Angie were married in Mexico. The resort they booked was destroyed by a huricane, so there was some last minute shuffling. The weather was perfect for their outdoor cerimony and Mexico was lots of fun. 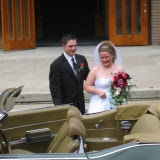 Daryll & Kristy had a big wedding at an old church near Bancroft. At their reception they served Bison from from one of their relative's farm. 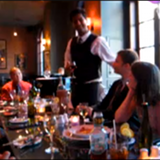 Mike landed a job in Kingston with ESG and was staying at our house on Queen St. with Karen while they were finding a place to live in Kingston and while we were away on our Peterborough-Fenlon bike trip. They called us to ask if we could come home a day early because they had planned a short-notice wedding at the gazebo near Murney Tower.

This was the first wedding of any of your contemporaries and we were very excited to attend. They had great weather and I took some photos for them on my old SLR from Jon Snelson.