I keep track of everything. Here's my sick record. I hate being sick. Perhaps this time it was my fault because I was riotously drunk two days previous, but sometimes that just can't be avoided. 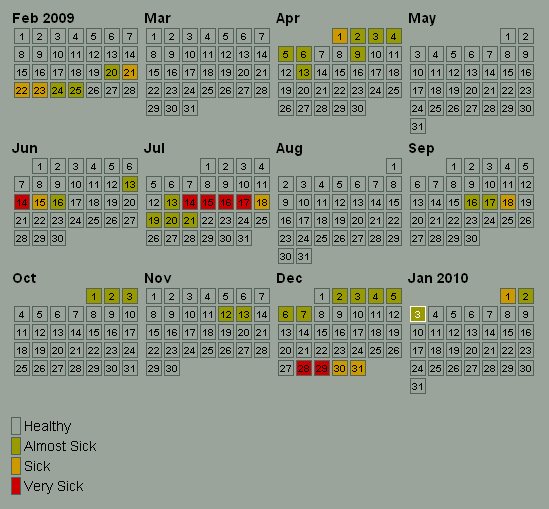 Here's the facts: Sunday, not feeling very good. Monday morning, sore throat. By Monday evening, throat is very painful, no white spots on back of throat (assume not strep), lots of thick yellow mucus from sinuses, no body aches-pains, no fever of note. Self diagnosis: bacterial infection or common cold. Treatment: rest, fluids, NeoCitran and Strepsils (because that's what my mom always gave me), Tylenol Cold and Tylenol Sinus (because we have it around the house), and Chloraseptic Sore Throat Spray which I had never heard of. Amanda bought it for me this time and I'll use it hereafter.

I hate having a sore throat. It hurts so bad that I have to clench my teeth to swallow. I clench my teeth so hard that I'm worried my teeth will break. Eventually my jaw gets tired and starts to ache. It's a downward spiral of misery.

Anyway, eventually I get better and trade bedridden-sore-throat-exhaustion-with-blowy-nose for blowy-nose-with-occasional-evil-cough-that-hacks-up-green-phlegm. Yuck. I never bother going to the doctor when I'm sick because they never do anything, but on the seventh day I thought I'd reconsider. So I walked to Appletree and after waiting for an hour tried to ask my question. They wanted to jam me into the tell-current-symptoms-send-him-home mold, but I eventually shook them out of it. What I wanted was three minutes to describe my week (my symptoms, my actions) and ask if I should have done anything differently (i.e. come in and asked for antibiotics). Also, seven days sounds like a long time to be sick. I didn't really get straight answers, but that's probably your standard evasion of liability. Hereafter, I will live by the following algorithm.

Never visit the doctor unless: