Snowshoeing On The Dark-Side 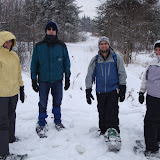 This xmas, Chris & Angie got us snowshoes. So to start off the year right, the four of us followed Roland into the bush. It was a couple of years ago that Amanda had the idea that we should rent snowshoes from MEC and hike in Gatineau. But there was so little snow and the trails were so well trodden that we didn't really need them at all (crampons maybe). Despite that, we had a great time and Roland recognized the awesome snowshoe potential and bought himself a pair. Hence, he is our fearless leader in the wilds of Kanata Lakes.

There's a parking lot near the beaver pond on Goulbourn Forced Road. From there we hiked west into the bush. Roland knows the place like the back of his hand. We spent most of our time on a bike trail called "The Dark Side", near the beginning of which we found a porcupine in a small cave. Very exciting. Lots of fun. The bush in Kanata isn't as pretty (or hilly) as Gatineau, but it is easier to get to and much less crowded. I prefer it.