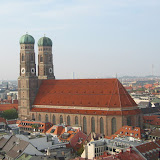 Mike and I wake up and get out of the hostel by 10am. We walk to the St. James shopping plaza to mail some things home: a tweed skirt, the pants I bought and some presents. After that we get some lunchy things: crakers and cheese, smoothies and salads and walk to the base of the Scott monument and eat them. Then we catch the bus to the airport. It's definitely the way to go 5 pounds for a round trip ticket.

We checkin and then I get a tea and Mike and I start debating The Handmaid's Tale, which Mike hasn't read. (I tell him the story and then we talk about it. To his credit, he's reading it now.)

Then we get on our plane and have a nice flight to Munich. I think we were only in the air for about 2 hrs, which was really great. I give Mike the tour of the airport, which I thnk is beautiful, and we walk to the hotel Kempinski, where I stayed for work. We're not dressed up enough, so we don't stay too long - it's really fancy.

We take the S1 train to the city centre and then are lost around the Hautbanhof station, trying to figure out where we are and where our hotel is. We run into an Enlishman who, rather than obstinately studying the maps like me, starts asking people and he gets us on track.

We check into our hostel, which looks like heaven compared to what the last one looked like. There are a whole bunch of people ahead of us in line trying to get a room for the night. It's Monday and Oktoberfest ended the day before, so there are still a lot of people in the city. (The newspapers said that 6.2 million visitors came to Oktoberfest this year) We find our dorm, unpack and then go out to get something to eat. We have pizza from the corner place. It's really good.

I keep getting bashed over the head with the differences between the German culture and ours. I don't know how lines work, what any of the signs say and I generally feel pretty helpless. Mike is a huge help, though.

After dinner we come back to the hotel and Mike orders some beer as we do our laundry. It takes 2 hrs for our 1 load of laundry to was and dry. We play chess, trivial pursuit and a memory game we make up.

Then we head back to our 22 person dorm and are really glad we have our eye masks, because the lights stay on forever.

It's strange having so many people sleep in the same space as me. They're all trying to be quiet and are all failing miserably. :) I can sleep through a train wreck, but Mike has a bit tougher time sleeping. He's ok this night, though... he had enough beer.

I'm up and dressed by 9. It's all Mike's fault.. He's reallxy excited about the new city. We check out the breakfast offered by the hostel and I know there are pastries somewhere nearby, so we leave and head to a nearby cafe. I have a great latte and we eat four pastries: a filled donut, A pretzel with ham and cheese cooked on top of it, a pastry that looks like a really sweet cone and a cinnamon bun. They're all awesome.

We walk up the expensive street, past a statute of Triton and towards Maximillianplatz. We keep walking until we find Rezidenz, the city's palace. WE sit in the gardens and plan Munich and what we want to do. We're on a bench, in the sun, near a fountain. I have a tea and we're both happy.

So we get up and go into the Rezidenz, which is an astounding building. We see about 100 chambers of the castle that have been reconstructed since kjd palace was destroyed in the second world war. We see the crown jewels and they're stunning.

We go to Swatch and I get a funny watch for my sister. Then Mike and I split up. He goes to Altar Peter (Peter's Church) and walks around inside of it, before climbing the tower and getting an amazing view of the city. I've gone shopping and have a new dress and belt to show for it.

We're both tire, and even though it's before 5 pm, we go to have dinner at a traditional beer hall. We take a long time over our dinner, 2 hrs, and head home. We had Barvarian radish to start, Mike had pig's knuckle and discovered he liked saurkraut, I had gnocci, which is very different here. Our dessert was Apple fritter: two circles of dough with apples in them that had orange liquor poured over them and then lit, so that they were cooked in front of us. It was great. I wasn to try to makt the apple fritter at home.

We walk home through Karlsplatz and I write on my blog while Mike talks to an 18yr old Vancouver girl about life, school and religion. By now it's 9pm and I'm tired and go to sleep after listening with Mike to his audiobook, The Wheel of Time.

Mike has a super rotten night: there's just as much noise in the dorm as last time, but this niught he hasn't had any beer and isn't tired, although i'm exhausted.

There's a 12% alcohol beer in Munich, but you can only get it at one place.

Mike is grouchy. I wake up totally well rested and have a Pepsi for breakfast. We order 4 pastries again, this time two pretzels with cheese, one donut and a apple strudel. The woman behind the counter is disapproving. :)

We start to walk to the English gardens but don't make it before we have to catch the S4 to Grasbrunn, whree the OT office is and we're to have lunch with a member of my team, Petra.

We tide the train and have a nice walk to Open Text. Petra takes me around and everyone greets me warmly and they greet Mike with surprise. That's when it comes out that we're on honeymoon. Petra takes us to lunch and while we're at the cafeteria we meet Tobias, who does security for Open Text. So he and Mike get along great and Petra and I gossip about work and where Mike and I should go tomorrow, Thursday.

Petra suggests after lunch that we go say hi to Franz and i ask to see steffen Roller, who is one of my favorite Open Text pple. Steffewn is happy to see us and plans a party - 6 ppl - for later that night at a traditional barvarian pub.

We leave very happy. Mike puts his head on my lap on the way home and admits he's tired. We go back to the hostel and move our stuff from the lockers to the 2 person room we've got for the next two nights. We have a nap and then go to the BMW museum and see the Olympiapark, where the olympics were held. The BMW museum is cool, but not as cool as the BMW headquarters across the street and the BMW Welt beside it. (Welt means world in german and if you buy a new BMW you have the option to pick it up there and drive it through the building and onto the street.

We caught the subway back to Marienplatz and found the restaurant no problem and Steffen and Andreas turned up a couple minutes later. We had the weirdest looking waitree, who Thomas and Steffen assured me was excessively rude. We had dinner from 8-11pm, when Petra had to go home. Thomas Woppmann, Steffen and Andreas ttok mike and I to a bar that was very loud, where we drank strawberry daquaris and a german drink that's serveed in a 1L glass and is made of vodka, rum, sugar, lime and ice. We stayed there until they turned the lights on. I was terribly drunk on the walk home from Marienplatz to our hostel near the Hautbahnof.

We were noisy and then went to sleep.

Something I learned: Germans tap the bottom of their glasses when they say cheers.

Mike has been plagued by what he calls a blowy nose - runny nose - since Dublin and today, after the stint with sleeping all those ppl in the dorm, Mike and I woke up with the most terrible head colds. We've made two forays: one for food and drugs and water, the other for food and water. We're sick. I'm writing on my blog to tire me out for another bout of sleeping.