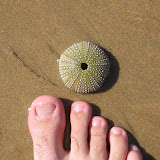 On Valentine's day, I woke up with Mike in bed beside me. You need fear not for your virgin eyes: Mike had miss-shot the covers as per usual and was curled up under the duvet but over top of the sheet, which was on top of me. It was the last day of Summit and I was tired.

I dragged myself out of bed and began packing. I did something deft with my hair and then the phone rang: the wake-up call. (When traveling I invariably wake up before the wake up call) I answered the phone and Mike sat up looking confused. He flopped back down into bed. I managed to slather on my makeup and get into some clothes before having to leave. I kissed Mike and ran out the door to the last Summit.

Summit ended after a couple of boring hours. We organized the usability lab and I went to the courtyard. I found Mike and Stephen there. I got changed as soon as I could: I was sick of wearing nice pants and professional clothes in the summer sun. I came back in sandals, board shorts and a cool hat. We hung out until Joyce & co left the hotel. Then we walked to the bridge that crosses Hwy 1 from the Hyatt to the beach. Stephen, me and Mike walked up the beach to the pier. You can see it on Google Maps. It's really neat. We had lunch there: a big hearty - read: unhealthy - American lunch. We also got to see some real life surfers. They were really good... And funny when they fell.

We were late and took a cab from the pier to Bolsa Chica State Beach. We had the CRAZIEST CRAZIEST cab driver who we paid too much to. He called the surf instructor who was supposed to meet us and yelled at him.. It wasn't funny...

The surf lesson was the best part of the whole trip - after we found the instructor. We walked around the beach for the longest time, looking for him. We were all lost: he was looking for us. Mike, the instructor, took us out on the beach for our lesson. We stood on the surfboards and practiced getting up and down. It was really really hard: like doing push ups over and over again. Mike and Stephen had a big jump on me, in that their biceps exist.

Nevertheless, we went out on the water. The surf was crashing down on us and we had a hard time getting out. The waves kept just tossing us off our boards and dragging us in to the shore. Mike, the instructor, took turns giving us shoves onto waves. I stood a couple of times and so did Mike. We had a really good time. By the time we got down the beach - the current was pulling us the whole time - I was pooped out. My arms felt like lead from all the paddling. Stephen and I sat in a little pool of water as we waited for the two Mikes. My heart was pounding.

We carried our boards up the beach and by the time we got back to where we had started I couldn't lift my arms anymore. We had a break for a bit then, but then Mike and Stephen were ready to go, so off I went. We decided to try to get past the breakers and I managed to get out during a lull. It was really quiet and nice out there, until I started worrying that I would be eaten by a shark. Mike, the instructor, came out to get me and gave me a shove onto a wave. Either his timing was off or I suck because I missed it. The next wave that rolled in was BIGGER and I thought that I'd be damned if I missed that one, so I paddled with my exhausted arms and managed to catch my first wave!! I stood up, but then came crashing down and got tumbled around in the surf... I yelled in victory, though.

After that the two Mikes and Stephen went out again, but I was too tired - wimpy arms - and laid on the beach. Mike the instructor gave us a ride back to the Hilton. Mike and I went to the Hyatt, picked up our stuff and went to the airport to pick up a car. I had a granola bar in the car and we drove to Newport beach where Mike had cunningly found a hotel. The hotel was full, though... The one next door wasn't. We booked a room for the night and I had a shower and was asleep before 7 pm. Mike was sad, though... It was his first real night in California and here I was ASLEEP instead of partying with him. :( He went to a couple of liquor stores - in search of some food - and bought some juice which saved my life the following morning when I woke up totally starving and dehydrated.

The day after Valentine's day dawned and we missed it. We were too passed out. I woke up about 9 am with my tongue stuck to the roof of my mouth. I asked Mike, croakingly, for some water and he said that there was juice. I've never heard sweeter words. I drank about 750 mL of grape juice without noticing and then shook myself out of bed. We decided to stay another night at the Newport Inn and we booked it with a girl at the front desk with the longest braid I've ever seen.

Then we wanted some breakfast. There is no breakfast along Pacific Coast Hwy 1. Don't try looking. It isn't there. We shot up by Fashion Island - I'm not sure if it's an island, but it's a piece of land that's a mall and large enough to call itself it's own island, even if it's just surrounded by pavement - and ended on a street that passed one of the Google buildings. We turned around in the Google parking lot. It was really fun to see it... kind of what the White House is for Poli-Sci majors. Knowing that where there are geeks there is fast food, we didn't give up hope and landed in at a true American diner/chain. We ordered too much food, but ate it and were full. Then we stopped at Starbucks - hey, did I mention that the day was sunny, beautiful and warming up? - and got some misdirections from one of the servers. There are no grocery stores along the route he sent us down. (We spent a lot of time in California driving around looking for some food.) We finally found a Randy's, which is American for Loblaws, and got some food and juice for the rest of the trip. (I think we only finished the water, but the rest of the food was comforting, considering the terrible lack of it in the hotel)

Mike had done some research and found a protected beach, so we drove up good old HWY 1 to the beach and parked. I'm ashamed to say that we drove straight there. Mike had a map and I was driving, so we got there in record time and with a record little amount of fighting. The beach was at the bottom of a cliff and behind us, and up, was a hill of really beautiful, matching, California ranch-style homes. (I'll ask Mike to put a link to the homes and their view here) We walked down a path that had a sign at the end of it telling us we weren't to walk on it (!!!) and got on the proper path and walked along the cliff to a set of stairs that went down to the water. This is where Mike's adventures began and my nap started. Mike, you had better fill in this bit :)

After I woke up, Mike talked to me for a bit and a girl - who we saw again the next day - came up and asked if she could take our picture. I wanted to talk to Mike rather than to the girl, so I talked to him and she took our picture. I'm sure the story that I wanted to tell Mike was really interesting... about a turtle or helicopter... It might have been about some snorkelers who had a stick that I maintain MUST have been for electrocuting sharks...

So then, Mike went to the car and brought his sleepy girlfriend some water and this perked her up and they walked down the beach to a part with rocks. I think that Mike took my picture next to a rock covered in mussels... there were lots of mussels.. It was a protected beach, though, so we weren't supposed to touch anything. Mike decided to play in the surf and I wanted to read. Then he went for a walk and by the time he got back I was done resting and reading for the day and wanted to do something. So we headed off to the hiking trail that Mike had found and that the surfer had said was ok to hike around.

Of course we got lost. The place that Mike wanted to start the climbing was INSIDE a gated community. There are a lot of these along the coast. We had to drive a long way out of our way to find one that wasn't so that we could turn around. The hill we wanted to turn around on was a STEEP hill and I had to stop at the top and then got really scared when the car went backwards so I squealed my tires. It was scary and I would probably do it again - the car we were driving had a V6, and a big one at that. So we shot back down the highway, talking and laughing about squealing tires. We saw a lot of Mexicans waiting for the bus outside the gated communities where Lexuses were arriving home. We really got a sense of Spanglish the whole time...

We got to the park and had only an hour before it shut and learned that there ARE snakes, but that they hibernate during the winter. We climbed up a hill and down a hill and then up and down again and an hour had passed. I was FULL of energy at this time, due to all the eating and resting I'd done all day. Mike took some pictures and they'll tell you more about what we saw than I can...

After we rested, sitting on the back bumper of the car, we drove into town and had Thai food. It was really good. Mike had a Thai iced tea which we have to remember to try to make sometime. After dinner we walked up the street. I forget what the town was called, but they have marble stores where you can have a fireplace mantelpiece commissioned. We went into a posh clothes store. I had sand in my ears and was wearing argyle wool socks with sandals and short pants, but the store people were nice and let me wipe Thai food on the skirts of their dresses. There was a street called Poppy, so I had my picture taken in front of it.

Then Mike and I were tired so we went to see Pan's Labyrinth at Fashion Island. It was really good, and the theatre was really nice. There was a carousel at Fashion island that Mike wanted a picture of and, after seeing Pan's Labyrinth, it was a little creepy: being so dark and animally...

We went to the Newport inn and crashed after that. We were too tired to speak. I may have had a shower.