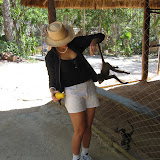 We woke up at 3:30am in the frozen city of Ottawa. Bob and Orlando drove us to the airport where we met Tobin and Richard. We waited about an hour before boarding, and they served us orange juice on the plane. The flight to Toronto Airport was brief. We arrived with more than an hour to wait for the connecting flight. Eventually mom, dad and Angie's family arrived. They served us breakfast on the flight and played a movie, but the audio didn't work. I slept most of the way to Mexico.

We went through customs in Cancun and boarded a bus to Gran Bahia Principe (Tulum). We saw a lot of destruction (from the hurricane) along the way. Eventually we arrived at our resort. We went to our room (number 2414), ditched our luggage and went for a swim in the ocean. Amanda wore her new blue one-piece bathing suite, and both of us wore water shoes. I just wore my little goggles. The surf was high. We tried to get up on the break waters, but Amanda couldn't because the waves kept tearing down her top. Next we went to the hot tub on the way back to our room. Later, in our room, we unpacked (etc.). Then we met with my parents and Angie and Chris and went to dinner. We had a big table (two put together actually) with the whole group. The buffet dinner was astounding. We were continually impressed with the food.

Earlier, at the hot tub, we decide to tell the parents that we drink. Before going to dinner, I put our valuables in Chris' safe. It was then that we broke the news to them. They took it very well. After dinner, we walked my parents home and went to sleep.

On day two (monday) we woke up happy and had breakfast at the snack bar (which wasn't very good). Then we met the Air Canada representative at 9:00am. Amanda wore a bikini and a wrap and was boiling the entire time. It was really hot that day. We went to the market to look for a boogie board (because the surf was so strong), but we didn't find any. We saw some neat hats though. Note: don't bring a hat to Mexico; buy one there. We went back to the room to get Amanda's tourist card and for a rest. Then we went to the lobby to meet with the wedding representative. We just sat there while things were planned. Then I booked dinners while Amanda looked at the wedding location (and bought and extremely overpriced boogie board from the gift shop). Then we all went to the buffet for lunch.

After lunch, Amanda and I went snorkeling, and I wore fins in the water henceforth. It was lots of fun. We came out of the water way down the beach and took a desperately needed shower. We went for a swim in the large pool by the lobby and had an underwater hand stand competition. That was fun -- in pool shoulder walking too. Amanda wore her rash guard and black bikini. We went back to the room and had a rest (etc.) and met everyone at 6:30pm to get to dinner. It was our last large (non-wedding) dinner with everyone together.

After dinner, we all went to the market and then all went to the show. It was a classic caribbean skimpy clothing dance show. We went for a walk and sat on the beach that night before the show. I think we stayed for the whole show.

On day three (tuesday) we had agreed to meet at 7:00am for breakfast, so I set the alarm for 6:30am but also inadvertently set the time forward one hour, so we actually woke at 5:30am, in the dark. We were grouchy, and we got more grouchy when we arrived at breakfast and discovered how early it was. Amanda, before being fully awake, decided it was madness to get up, but Mike asked her to, much to his eventual derision. She was awful and when it was discovered that they were one hour early, was a disaster. After this unplesant revelation, we went and sat on the beach. Amanda curled up on her skirt and sweater while Mike explored. We did discover that Mike's Camera has a clock - two hours out - but used this to show up for breakfast at the right time. It was the first sunrise Amanda and Mike have seen together - aside from when they were driving somewhere early (which is no fun). It was beautiful and we took lots of pictures.

When we arrived for breakfast, Chris and Angie were already there. Amanda had yogurt and grains -- super yummy -- and pancakes. After breakfast, Amanda and Mike went back to their room. Mike packed for a trip to Playa del Carmen while Amanda got ready to sit on the beach. She got to the beach before all the cabanas were taken, so she got one with a chair. She sat and read for and hour or so until she noticed that some men were windsurfing. She wanted to go and went back to the room to get her rash guard and water shoes. She got a board with a jiffy with a 3.0 sail and headed out. There were two other men trying to windsurf but she did a whole lot better! Highlights: 1. A man in a kayak asking her if she was tired. 2. Asking three times to a guy in a kayak in Spanish hand-language to move to the left so that she could sail into their path. 3. Having a guy tell her about how he couldn't sail because of the wind after she went out and came back. After sailing, she showered and changed and read her book on the beach until Mike came to get her for lunch.

Meanwhile, Mom, Dad, Chris and Mike walked to the highway and caught the local transportation. It's $2 USD per person to get to Playa Del Carmen. The vehicle is a large van that seats 15 people. The highway is one lane in each direction but each lane is wide. So, to pass, you sort of drive down the middle of the highway. At one point we passed a truck against an oncoming bus and it was a little hairy. The van took us to 5th avenue. It was very touristy, but also pretty. Chris walked with the parents and Mike until they found vanilla for mom, then he split off with Tobin and Richard. Mom and Dad and Mike walked to the south end of the street. On the way they met Ishmael and Mike bought silver earrings for Amanda. First he wanted $55, then $40, then $30. It was fun. At the end of the street, we saw the ferry. Along the way and at the ferry we saw police officers with helmets and machine guns. They were very effective deterrents. On the way back, Mike bought two silver spoons for Amanda's mom and Grandmother. Then we decided to head back to the resort (just Mom, Dad and Mike).

When Mike got back to the room, he found that Amanda had left a map for him to find her on the beach. She was in a better mood and told him all about wind surfing. Mike went for a quick swim and then we had lunch at the snack bar. Then we found out about Tulum and made plans to go there with the parents. We had a brief swim in the pool and met with the parents at 2:30pm to go to Tulum. We took a taxi to Tulum. It arrived at the resort to pick us up almost Immediately. It took about 15 minutes to get there and cost $15 USD. The driver's name was Fransisco.

Later that night (6:30pm) we went to the Tequila (mexican) resturant and saw the night show.